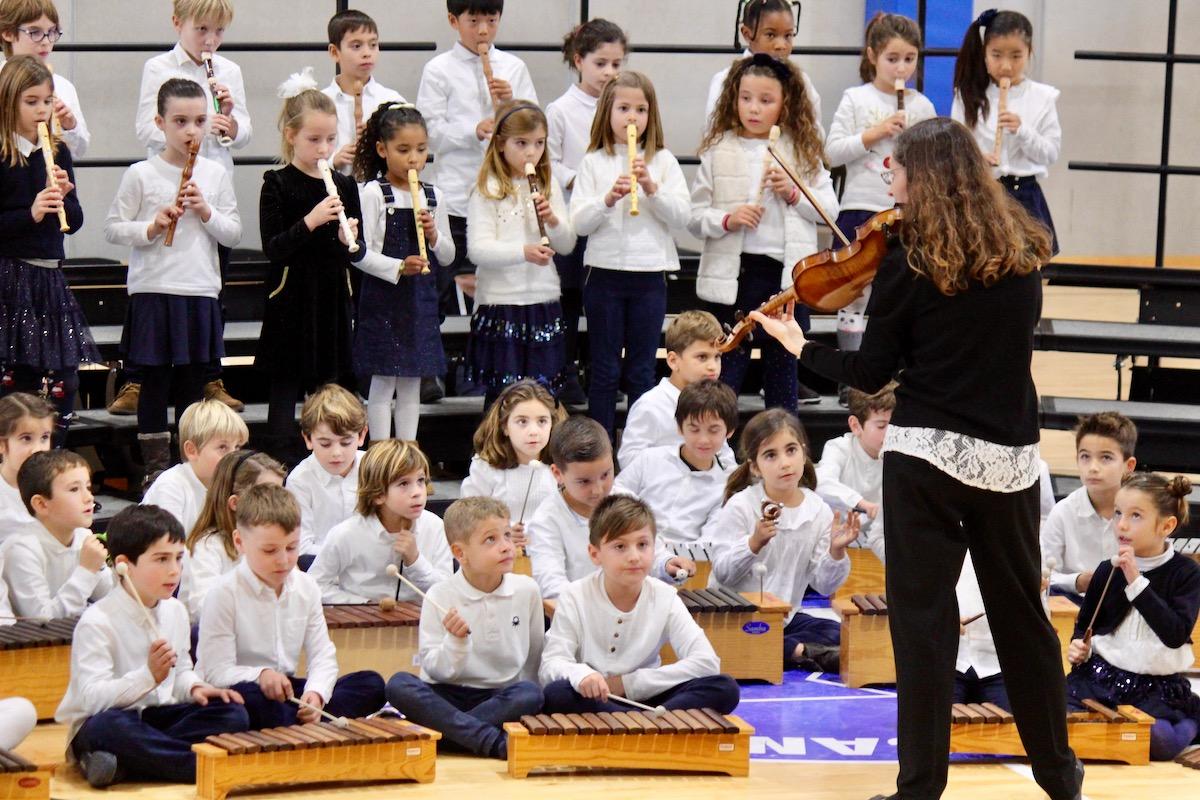 Our school is approaching the Winter Break by holding a variety of activities for families and students. This past week the Athletic Center hosted the Winter Concerts for Elementary School (two events, on Wednesday, December 11) and Middle School (a single concert, on Thursday, December 12).

The first concert on Wednesday featured Orff Ensembles from students in grades 1, 2, and 3, conducted by Ms. Cecilia Calvelo; the show included pieces from Nigeria, France, Argentina, England, Israel, Wales, United States, and of course Spain. The program showed the skills children in these grades have been acquiring during the first trimester which included not only singing but lots of instrumental playing.

Later on that day, grades 4 and 5 (second picture) offered their show, which was designed under the idea Holiday celebrations around the world.  Students performed songs from Switzerland, México, Venezuela, and Germany, among other countries. Feliz Navidad (a classic Christmas pop song in America composed by José Feliciano) was the final piece. Ms. Ortiz was also in charge of the Middle School concert, on Thursday, which involves students in Grades 6, 7, and 8 taking Music during the first rotation of the year.

The three events had a great turnout. Parents, grandparents, and siblings in other grades, enjoyed the quality and passion of our singers.

These days the ASV Community shows a strong support to the school service initiatives.  Elementary classes have shown an outstanding response to the Holiday Food Drive organized by the CAS Coordinator, Mr. Boyer, to benefit children living at El Preventorio, a children’s home in Real de Gandia. The donations were ready for the visit of a group of children and three monitors made on Thursday, December 12. CAS students organized holiday crafts and the group also attended the Middle School concert.

In addition, Middle School classes have been collecting donations for a local charity, Pasalo Puçol.

Instagram Facebook-f Twitter Linkedin Youtube
PrevPreviousSuccessful Audit Report of the Academic Year 2018-2019
NextBridge Design CompetitionNext
ASV SUMMER PROGRAM
VIEW MORE
Join Our School Community
If you would like more information, would like to schedule a tour or are ready to begin the application process, please click on one of the options below.
Schedule a Tour
Apply now
Stay connected