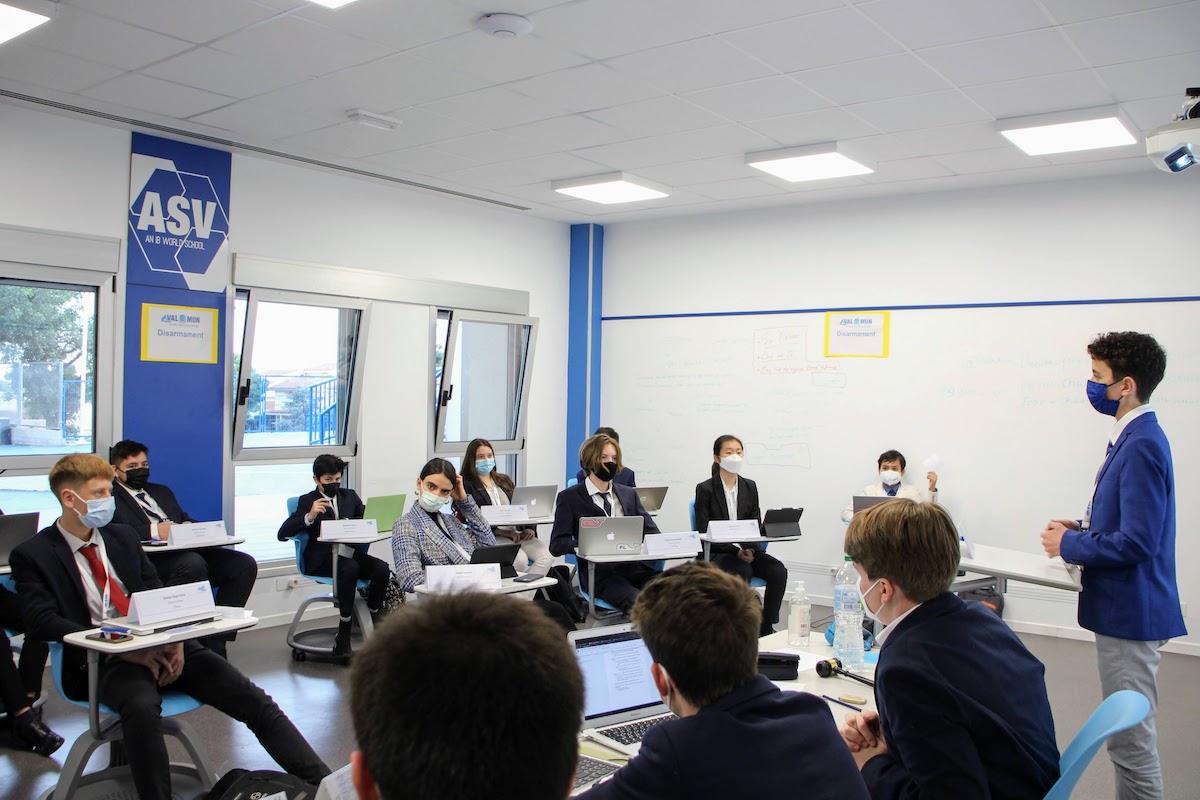 Due to COVID and travel restrictions, many international schools that have participated in VALMUN were not able to participate this year.  Events involving all of the delegates were moved to larger spaces such as the ASV Athletic Center and participants followed the same precautions used on campus on a daily basis: temperature check, frequent hygiene and mask use.

Guided by a general theme, The Revolution Century, delegates discussed in five committees a variety of global topics that are part of the current UN agenda. “The revolution century refers to all of the drastic changes the global community has undergone in the past 21 years and that are ongoing right now, that need immediate tackling for everyone’s wellbeing”  VALMUN’s secretary general Gaia L. (Grade 12) says.

This year, the opening ceremony took place on Friday. Debates on Saturday were extremely fruitful. All the committees managed to pass at least 2 resolutions which is a great achievement considering the controversial nature of many of the issues at hand. “I think that the issues we discussed have touched our delegates. They may take this opportunity to look at issues from a different point of view that differs from their everyday life,” Gaia says.  There was a great level of engagement which exceeded every student officer’s expectations. “I also was impressed with the level of improvement of first-timers, that is, those delegates participating in an MUN conference for the first time who showed great professionalism and confidence throughout”.

On Sunday, organizers challenged delegates with 2 crisis situations on a made-up global crisis on the use of COVID-19 vaccines and on a breach in Area 51 security.  Outstanding novel delegates and those who did remarkable work in each committee were awarded diplomas in the closing ceremony.

VALMUN 2021 also had its first-ever official newspaper: ComMUNication, put together by Sandra S., Youssef F. and Danila K.   The paper had two editions, one on Saturday and the second on Sunday morning, and was delivered to all delegates through an electronic version.  It included information on topics discussed during the conference, as well as featured interviews with delegates, chairs and even alumni. ComMUNication is hoped to be a permanent incorporation to VALMUN and thus be continued in future conferences.

Instagram Facebook-f Twitter Linkedin Youtube
PrevPreviousThe United Nations Sustainable Development Goals Present at ASV
NextVaccination campaign for Grades 4-6 Held at ASVNext
ASV SUMMER PROGRAM
VIEW MORE
Join Our School Community
If you would like more information, would like to schedule a tour or are ready to begin the application process, please click on one of the options below.
Schedule a Tour
Apply now
Stay connected